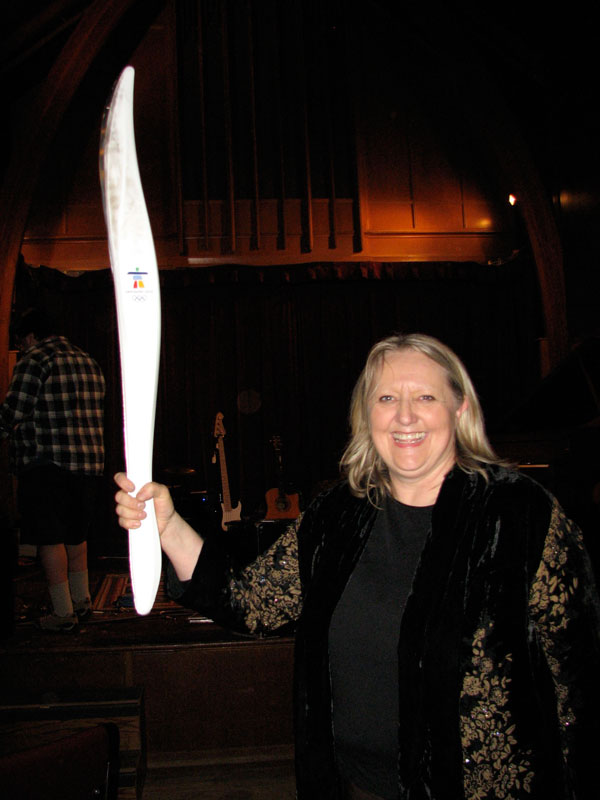 Connie Kaldor is a Juno award winning artist who has sung for royalty (Joni Mitchell, the Queen) and is a member of the Order of Canada. Her touring has taken her across North America and around the world. She has fourteen albums to her credit; three award winning children’s books/cd’s, a musical and much more. Her original songs and riveting performances evoke the powerful and unique presence of the Canadian prairies. Witty and serious, down-home and metropolitan, her versatility and talent ensure that she is an artist whose fan base expands with every show. Here we see Connie on her last visit to The Rogue in 2009, holding the Olympic Torch she carried on its cross-country journey to the Winter Olympics!

Sadly for some, we no longer have any tickets available for Connie's show online, but the ticket outlets might have some left. Try Highlife Records on Commercial Drive, Prussin Music at Broadway & Dunbar, Red Cat Records 28th and Main Street, or Rufus' Guitar Shop at 10th and Alma. Connie returns with a great new CD, Love Sask (it's the name of a very small town in th Province where she was born and raised.) She has lived in Montreal for many years and her husband and son will be accompanying her in concert at The Rogue - her only stop in the lower mainland on her latest tour of the West. www.conniekaldor.com
2. Don Ross & Jon Gomm, Sunday September 27th 8pm, St. James Hall (3214 West 10th Avenue) 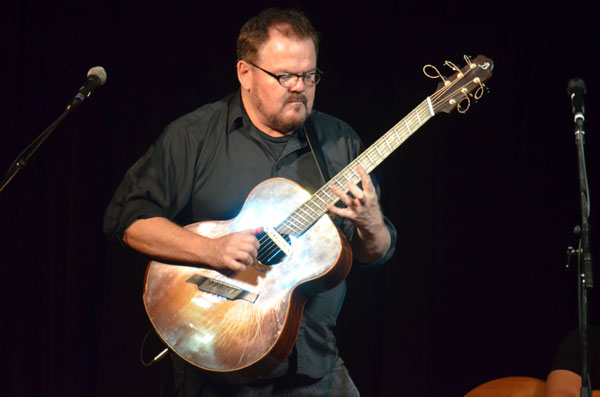 Don Ross (pictured above at his most recent Rogue gig last fall) is an incredible guitarist, and prolific composer. He has performed at The Rogue no less than 25 times since 1990, and has inspired a whole generation of young musicians to take up the guitar and to learn his tunes and techniques. Every year he comes back with new tunes, and / or a new guitar (like the mind-boggling 7 string and the one with the angled frets), and / or a new guitarist - or bass player - he wants to introduce to us all: Brooke Miller, Thomas Leeb, Men Of Steel, International Guitar Night, Jimmy Wahlsteen, Michael Manring, Jordan O'Connor, Andy McKee, Harbord Trio and others. Now he brings us Jon Gomm for his Rogue debut. While Don is renowned for his funky tunes, Jon has converted some rock anthems to the acoustic guitar. Both musicians have an impressive catalogue of original tunes, and they both sing too, They will each perform solo and they will also get together to play a few tunes. A must-see for guitarists and fans of superb musicianship, this show is selling fast - but we still have quite a few tickets left (at the time of writing, that is ....) www.donrossonline.com www.jongomm.com 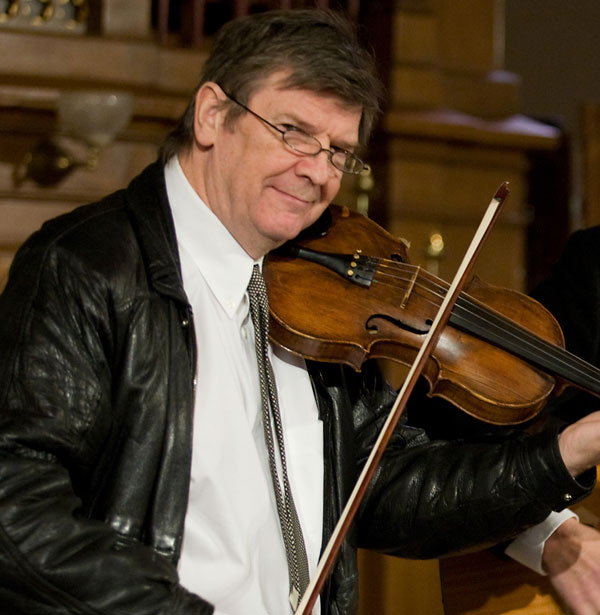 Kevin Burke was raised in London though, his family used to visit Ireland for their Summer holidays when he was growing up. There he developed his love of traditional music, while back in London he listened to all sorts of music from The Kinks to The Classics. He was blessed with a very supportive and imaginative fiddle teacher, Jessie Christopherson, who encouraged him to explore all these styles. After the lessons his father would wonder why he didn't sound like the Irish greats like Sligo fiddler Michael Coleman. Ms. Christopherson asked to borrow the records which the family loved so much. Eureka! She realised at once that the sheet music was merely a guide to the essence of the tunes. The real soul of the music lay in the ornamentation and (extra) grace notes, Hearing Coleman she remarked "he has found the soul of his instrument". Quite a concept for a young musician to embrace, but embrace it he did, and Kevin Burke rapidly became known as one of the finrst Irish fiddlers of his time. Ry Cooder and Arlo Guthrie noticed this, and he recorded with both of them at a young age. He later joined The Bothy Band, alongside Donal Lunny, Triona and Michael O'Dhomnaill and co. The Bothies introduced the powerful energy of rock music to the acoustic format of traditional music, and a new generation was swept up by the intense fervour and passion of Irish music. After decades of turning their collective backs on traditional, rural, primitive folk music, young people were suddenly enamoured of the new cool (ceol) music, and the phenomenon of Celtic music as we know it today was born. Now, almost forty years on, Kevin Burke remains one of the most celebrated of all Irish fiddle players, whether solo, or with jazz guitarist Cal Scott, or with the Scots / Irish / Breton / Quebecois ensemble The Celtic Fiddle Festival, or with Andy Irvine and Jackie Daly in Patrick Street. Kevin Burke's latest project is to return the fiddle to its "natural" state, before such celebrated ensembles came to the fore. All fans of Irish music take note: A fully-clothed Mr. Burke will bring his unadorned violin to The Rogue for this very special concert on October 4th. Traditional fiddle music was usually played solo - or "naked:", as he prefers to put it! Come along and hear just how powerful a solo fiddle can be!! www.kevinburke.com 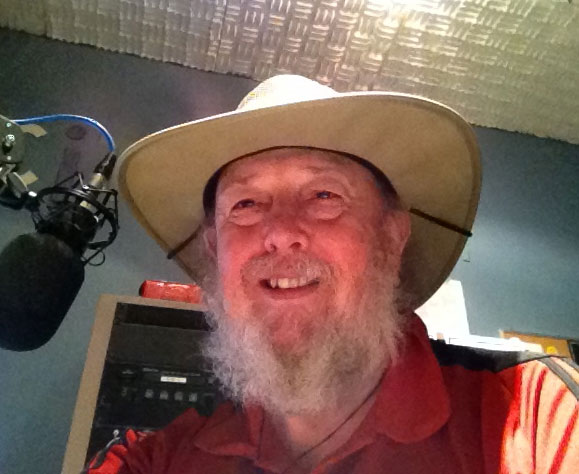 On this week's edition of The Edge On Folk I'll be spinning new releases by the likes of American old time trio Maiden Radio, African band Blick Bassy, Guinea-Bissau chanteuse Karyna Gomes, South African trio The Soil, New Brunswick francophone group Vishten, Vancouver-born songwriter and banjoist Linda McRae, Minnesota singer Martha Scanlan, Amy Helm (daughter of Levon Helm) with her frst solo CD, California brothers Dave & Phil Alvin, and Senegalese singer Elage Diouf - now a fully-fledged Canadian in Quebec. It's SOCAN week, which means that the Canadian performing rights organization is monitoring CiTR (they usually only collect reports from commercial radio and CBC - but it's the campus and community stations which play the majority of Canadian independent artists. Once or twice per year we send our playlists in to SOCAN, and Canadian musicians can claim a little morsel of extra revenue.) So tune in to hear lots of great Canadian music as well!

The Edge On Folk runs from 8am to noon every Saturday on CiTR fm 101.9 and is streamed live on www.citr.ca

Radio Rogue runs all day and all night from Rogue Towers on Granville Island. The newly-expanded playlist is now around 1,750 songs and can be accessed here 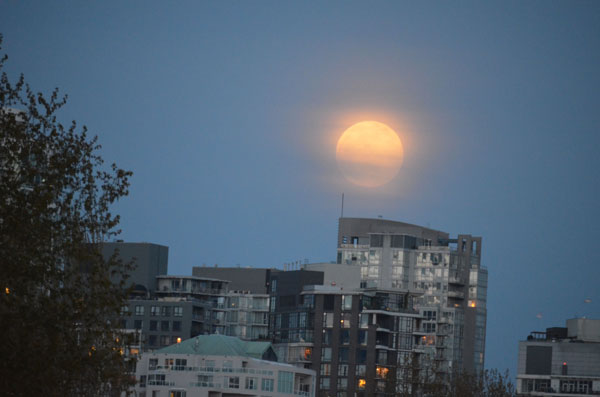 Watch this video to learn more about the red moon total eclipse that will be visible on Sunday evening. We don't have a retractable roof at St. James Hall, but the intermission should be a great time to see this phenomenon. I took this photo of our most recent red moon in April last year. This Sunday's will be much more spectacular!