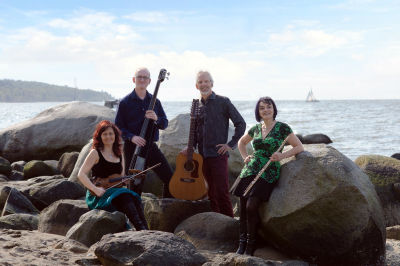 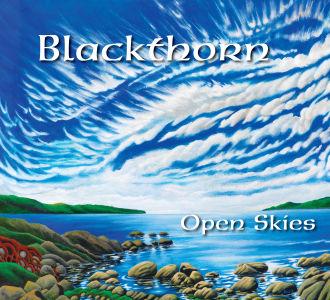 Blackthorn is excited to announce the release of their much anticipated new recording, Open Skies, available September 1st, 2015.

Blackthorn is a Canadian Celtic folk band that saw its inception back in 1989 with a group of musicians who found a common interest in a music that wasn’t all that common in Vancouver at the time. Early highlights included performing at Vancouver’s seminal Celtica Festival in 1990 along with De Dannan and Andy M. Stewart and performing and recording with the World Champion SFU Pipe Band. Since then, the group has travelled a long road through the streets of traditional and contemporary Celtic music, performing concerts and at Celtic and Folk Festivals and Highland Games throughout Western Canada and the Pacific Northwest.

The new CD features an impressive assortment of their adaptations of traditional folk songs and original compositions. The arrangements are fresh and inventive and their performances reflect the maturity of their musical skills and creativity. The title track, Open Skies, was written by Michelle who was inspired by a Blackthorn tour of her home province of Saskatchewan. The song invokes her feelings of being from a small prairie town and moving away. Saskatchewan’s motto “Land of the Living Skies” inspired the album title as well as Rosie’s evocative cover artwork.

As well as her own composition, Michelle also lends her georgeous voice to Country Life, an old English favourite; Jolly Rovin’ Tar, a rollicking sailor song; and the beautiful and timeless, Loch Lomond which also features their good friend, Jim McWilliams, on bagpipes. Tim demonstrates he is more than just a solid bass player when singing Andy M. Stewart’s Queen of Argyll and skillfully takes on the roll of singer/guitarist on the Irish classic P Stands for Paddy. Michael’s predominant heritage is represented by the two songs he is featured on. Rattlin’ Roarin’ Willie is a Robbie Burns song with a great story and he learned V’là l’bon vent growing up in “historic” Maillardville and still sings regularly as a Voyageur canoe guide.

Rosie rosins up her bow for some fine, fancy fiddlin’ on the Mouth of the Tobique set which contains some French Canadian flavour mixed with a bit of Scottish spice. Michelle worked up an arrangement of Jim McWilliams’ compositions for an impressive pipe set they affectionately refer to as Bonnets Aflame. Michelle and Rosie both composed tributes to their band mate Dianne Foster, who passed away in February 2008, with their instrumentals Song for Dianne and Mad Dog.

For fans that have been anxiously awaiting something new from Blackthorn since their previous release in 2008, Open Skies is well worth the wait. This is definitely a CD that you’ll listen to from start to finish, over and over again.