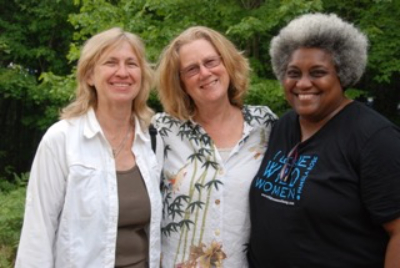 Send Email
This concert is produced by Sounds & Furies Productions. Tickets are available on a sliding scale, starting at $30. (Parcel O'Rogues and member discounts are not available tonight.)

Holly Near
has been singing for our lives for over 45 years, as so many of us know and love. Her lyrics can be tender, humorous and inspirational as well as biting and challenging - and all the while she keeps it personal.

Holly Near is a singer—about that there is no doubt—and yet her remarkable career steered her course to become one of the most articulate and responsive social change artists of our time. The legacy of work she has created, unsurpassed in its depth, breadth, and scope, stretches far beyond the mainstream music business. At the center of social change movements for the last forty years, Holly Near has inspired generations of artists and world citizens to commit their hearts and talents to peace and justice.

Holly sang where others would not. She went to war-torn El Salvador to sing at a music festival for peace. She and the other musicians were followed by death squad cars and had to keep strict curfew. In Washington, DC, she joined with Lebanese and Palestinian artists for a concert in support of children in Lebanon. For years, no other non-Arab artist would perform at the event except for Pete Seeger. Holly performed a duet with Simone Shaheen as they turned Near's Appalachian-styled Mountain Song into a cry for peace in the Middle East.

Holly instigated national tours that focused on issues of nuclear disarmament and clean energy, and defended women's studies on college campuses. She did concerts and rallies that supported the United Farm Workers, striking nurses, ending the death penalty, and raising awareness about racism in schools.

Tammy Hall is a remarkable force on keyboards. Her ability to cover a broad range of style brings beautiful texture to the material allowing Holly to move seamlessly through folk, jazz, and theatrical interpretations of the music. When not working with Holly, she is an instructor and mentor with many non-profit arts organizations making music and theatre accessible to under-funded inner city children. Tammy has traveled extensively working with Harlem Gospel Singers, The Montclair Women’s Big Band, Regina Carter, Linda Tillery, Alive, Melba More, Darlene Love, and more.

Jan Martinelli has played bass with Holly since the early nineties, both on recordings and on tour. She is fiercely rhythmic as well as having a lyrical quality well suited to Holly’s repertoire. Jan is part of Wild Mango, a women’s Latin band that moves from merengue to bolero to samba to funk with rich undertones of Middle Eastern spice. When not recording or touring, she sits in with a jazz big band. Ms. Martinelli also works as Holly’s musical assistant, managing the charts and teaching the arrangements to artists who move in and out of Holly's touring schedule.

We are delighted to announce that Tory Trujillo will be joining Holly, Tammy and Jan in Vancouver. She was raised on everything from Motown and Carole King to Mexican banda music and Bob Seger with a heavy influence of gospel greats like Mahalia Jackson. Tory Trujillo brings all of this and more to her expressive vocal work whether she's backing Laura Love, Holly Near or Nedra Johnson, singing her own healing compositions or performing sacred music in a ceremonial setting for thousands or in private sound healing sessions for one person.