This concert has already taken place. Give us your impressions of the show in our guestbook. 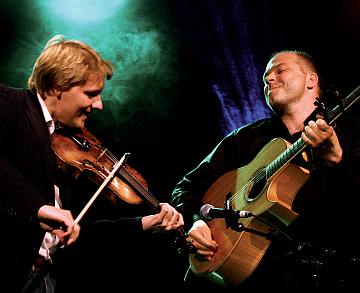 Harald Haugaard (fiddle) and Morten Alfred Høirup (guitar) are a fabulous acoustic duo from Denmark. In this, their 10th year of making music together, they are touring the world with a hot new CD, Travelling. Often compared to Ireland's Martin Hayes and Dennis Cahill, they too share an almost telepathic understanding of each other's music. You may not be familiar with Danish music, but if you like Celtic fiddles you'll love them!

The duo, formed in 1998, has become one of the most successful groups ever in Danish folk music. Their concerts, both in intimate venues and on some of the largest stages of European, North American and Japanese World Music festivals, has gained Danish folk music a new recognition with enthusiastic audiences, outstanding reviews and innummerable radio- and TV appearances.

Haugaard & Hřirup specialize in an elegant mixture of traditional Danish music and original compositions arranged for violin and guitar. The duo has gathered their traditional material from family members, friendships with older "tradition carriers" and from the great old Danish music collections. The Haugaard & Høirup sound is Danish music at its most melodious: light and elegant with it’s own sweetness, a hint of the enchanted and a touch of the diabolical. The duo has renewed the power of Danish music with fresh spirit and performs it with humour and a slight ironic twist.

"Guest artists from Denmark, fiddler Harald Haugaard and guitarist Morten Alfred Hřirup were the surprise hits of The National Folk Festival with their contemporary spin on traditional Danish music. Their breathtaking skill and dedication to their arts converted thousands of people overnight into devoted fans of the music from the land of Hans Christian Andersen." — State of Art, Australia