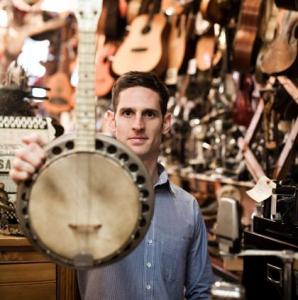 The Yo-Yo Ma of the banjo! - Globe and Mail

Stone thrives on unexpected inspiration: Japanese poetry, Brazilian literature, instruments he found while traveling in remote Malian villages. He finds it with influences as diverse as Anouar Brahem, Bill Frisell, and Toumani Diabaté. His Juno Award-winning albums, most notably Africa to Appalachia, both defy and honor the banjo's long role in the world's music, turning historical connections into compelling music.

The last chapter in Stone's musical travelogue took place in Africa. He went knowing what's still news to most: that the hide-covered instrument with an "extra: drone string we call the banjo actually comes from West Africa. He became particularly curious about the music that may not have made it across the ocean on slave ships headed west from Senegal and Mali in the 1600's. The resulting album, Africa to Appalachia, is a boundary-crossing musical collaboration with singer and kora maestro Mansa Sissoko.