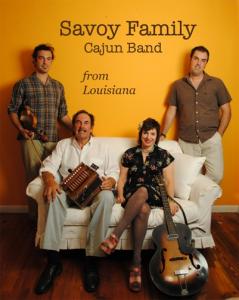 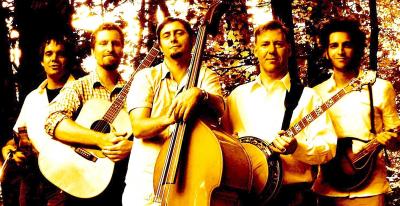 THE BLUESHORE @ CAP i

We have teamed up with our good friends at the Capilano Performing Arts Theatre to present this amazing double-bill, featuring some of the finest Cajun music anywhere plus Canada's premier bluegrass / honky tonk combo! (Please note that we have cancelled the Foggy Hogtown Boys' concert at St. James Hall that night. We are delighted to be able to resolve the date conflict with the perfect solution: working with North Shore Jazz to bring it all together under one roof.)

The Savoy Family Cajun Band play honed down, hard-core Cajun music laced with an earthy sensuality. The Savoys are Marc and Ann Savoy with sons Wilson and Joel, a family with an entrenched history and storied career in Louisiana's Cajun culture. Marc is a famed accordionist and accordion maker. Ann sings and plays guitar. She was featured on recordings by Emmylou Harris and Linda Ronstadt as well as her other band The Magnolia Sisters. Joel Savoy played here last year with Jesse Lege. He's a brilliant Cajun fiddler. His brother Wilson plays keyboards and fiddle with the Pine Leaf Boys. Delving into the history of the music, the Savoys bring the raw energy of the dancehalls of southwest Louisiana to the stage, peppered with informative anecdotes about life in the Cajun heartland.

Musically, they sure ain't no stuffy preservationists; whether a bitter lament or an earthy hard-driving breakdown, with Marc's squeezebox, Ann's guitar, and their highly capable sons Joel and Wilson on fiddle and keyboards, the Savoys cover the Cajun spectrum with a dazzling mixture of spiritual joy and virtuoso voltage. – Jonny Whitesides - Los Angeles Times

The Toronto-based Foggy Hogtown Boys have established themselves as one of the most exciting bluegrass bands in the country. The FHB are Andrew Collins on mandolin, Chris Coole on guitar, Max Heineman on bass, Chris Quinn on banjo and John Showman on fiddle. Although, the group draws a great deal of inspiration and material from the "golden age" of bluegrass and country music, solid original songs written by members in the band blend well among the old chestnuts. In 2005 they released Northern White Clouds - a 100% Canadian content bluegrass album that features some excellent writing from all the members of the band. Their latest album The Golden West (2008) is a mix of original and traditional bluegrass music with elements of old-time music and honky-tonk thrown in.