Watch the official videos on 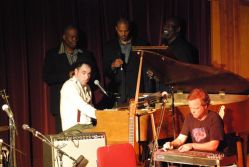 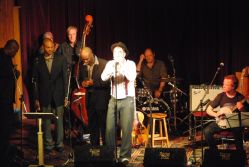 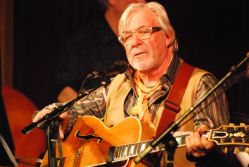 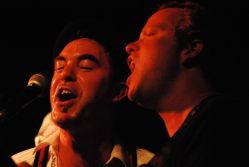 This concert was absolutely incredible! A packed house and a band in peak form. A truly memorable way to mark 25 Years of the Rogue Folk Club, with tributes to the music of centenarians Robert Johnson, Bill Monroe and Woody Guthrie, and 50 years of recordings by Bob Dylan and The Beatles.

Thanks so much to musical director Steve Dawson and the band. What a fantastic show!!

Thanks to everyone who came to the concert, to all the volunteers, to Kathy Campbell for supplying the band, and to Rob Nelson for a brilliant job on sound!

This was the Set List. (Featured vocalists in parentheses.) The whole band was on stage most of the time.

Everyone was on their feet dancing to Twist & Shout and singing along with Rolling Stone. What a night! (How the heck do we follow that?)