The Life of a Music Promoter « |   » Rogue Silver Jubilee Concert | 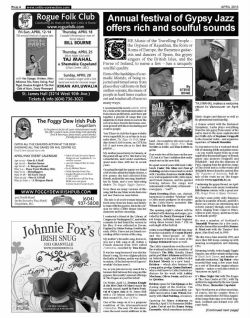 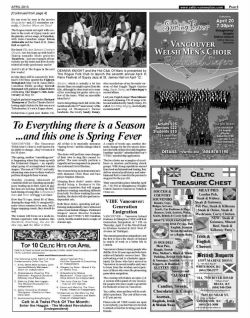 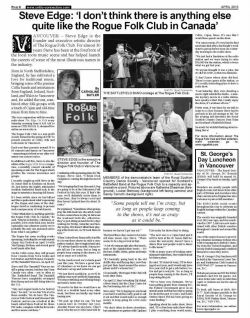 The Music of the Travelling People - the Gypsies of Rajasthan, the Rom or Roma of Europe, the flamenco guitarists and dancers of Spain, the gypsy singers of the British Isles, and the Pavee of Ireland, to name a few - has a uniquely soulful quality. Born of the hardships of a nomadic lifestyle, of being rejected and turned away from places they call home on their endless sojourn, the music of people in hard times reaches out and touches all of us in so many ways. I recommend the movie Latcho Drom for a look at the international nature of Rom music and lifestyle, and I have put together a playlist of songs that you might like to track down to see how the rest of us have tried to find some common ground with these fascinating and creative people. You'll have to visit the Rogue website www.roguefolk.bc.ca or tune in to my radio show, The Edge On Folk , Saturdays from 8am to noon, on CiTR fm 101.9 and www.citr.ca to find that playlist ....

My mother passed away in January, at the grand old age of 92. She had a very colourful life, and I wish I could have spent more time with her in recent years. On going through her papers we found a lot of notes about the family history, a few poems she had collected from friends, and just the one song: handwritten by Mum, and a very interesting choice. The Raggle Taggle Gypsies. Now, there are many versions of this song, but the one Mum wrote down was not one I had ever seen before. The tale is of a rich woman being enticed away from her home and family to roam with the gypsies, but in this version we delve a little deeper into her character and her reasoning. I contacted a friend at the Library of Congress in Washington DC, and within a minute he had found the version in his files. It was collected in Devon, England, by Sabine Baring-Gould in the early 1900s. I have not yet found a recording of this version of the song.

My mother's favourite song, however, was not a folk song at all. Rather a French chanson from 1940 called J'attendrai, recorded by Tino Rossi. It was her song because it was also her fiancé's song; he was a fighter pilot in the Battle of Britain, and he was killed in action. (If he had survived I guess I wouldn't be here now!) So, as you join me in my search for a tenuous link between this song and the gypsies, this month's musical offerings at The Rogue are just the ticket! On Friday April 12th, Deanna Knight & the Hot Club Of Mars launch the 7th annual April In Paris Festival of Gypsy Jazz at St. James Hall with a CD release cabaret to launch their second CD, Kiss Of Fire. One of the songs on it is a gorgeous rendition of the aforementioned J'attendrai. The new CD also showcases the most recent additions to the band - two members who were not on their debut CD, Gypsy Fire: Tom Neville on fiddle, and Don Kellett on guitar. Don wrote two of the tunes on the new CD, but it is Tom's addition that really stands out on the new disk. He spent several years with local Celtic bands Under The Moss and Fear of Drinking and also toured and recorded with Canadian chanteuse Joelle Rabu , so is well acquainted with Celtic music and French chanson, and his spirited bowing imbues the songs and instrumentals with plenty of itinerant - even gypsy - "soul'! Mark Dowding (flute, sax, clarinet, harmonica) is another "Martian" with a Celtic music pedigree: he also plays in the Celtic / Slavic ensemble The Wheat In The Barley. The opening night's cabaret will be redolent with dancing and magic, provided by the Dusty Flowerpot Cabaret troupe, including some beginner Swing Dance lessons from 7pm on each night of the festival. Guitar wizard Paul Pigat will step away from the rockabilly of Cousin Harley and the blues / gospel of The Sojourners to treat us to some of his Django Reinhardt tunes as well.

The Celtic connections over the rest of the weekend include two members of Victoria's The Bills: Hornby Island guitar god Marc Atkinson and his trio on Saturday night, and fiddler / violist Richard Moody in a new band - Brishen - which also features the young guitar prodigy Quinn Bachand, who is well know to Celtic Festival audiences for his work with Ashley MacIsaac, Oliver Swain, and his sister Qristina. Brishen opens for Van Django on the closing night of the festival. Van Django's fiddler is the incredibly versatile and creative Cam Wilson (formerly with Mad Pudding, of course). Opening for Marc Atkinson on Saturday April 13th is Romanian fiddler Lache Cercel and his Roma Swing Ensemble, which sometimes includes Slavic singers and dancers as well as his phenomenal musicianship. A former soloist with the Bucharest Symphony, Lache plays everything from the raw gypsy / Rom music of his native land to the more sophisticated jazz fiddle style of Stephane Grappelli to the classical violin - and expansive repertoire of Yehudi Menuhin.

So it promises to be a weekend chock full of stunning fiddle and guitar music - as you would expect from an event inspired by the musical legacy of French gypsy jazz pioneers Grappelli and Reinhardt - and also the chansons of Paris, ranging from the glorious songs of Tino Rossi and co to the wacky and delightful theme from the cartoon film The Triplettes of Belleville. Full details of the event are on the Rogue website www.roguefolk.bc.ca

Continuing the gypsy thread, on April 18th Canadian roots music troubadour Bill Bourne returns with a great new CD, Songs From A Gypsy Caravan. He plays some pretty nifty flamenco guitar on a number of tracks, and Bill's shows are always an entertaining and eclectic journey through roots music styles ranging from Cajun to Blues, Celtic to well, gypsy, and from Dylan to Icelandic poetry! He was a member of Scotland's Tannahill Weavers for a few years, and also formed the incredible Bourne & MacLeod with the Tannies' first piper, Alan MacLeod, in 1990. The duo won a Juno award in 1992, and since then Bill keeps coming up with amazing accompanists and stunning CDs.

Returning, briefly, to the Raggle Taggle Gypsies, one of the variants on that song is Black Jack Davey, and another remarkable troubadour, Taj Mahal - who recorded that song a few years back as a sort of Hawaiian reggae / calypso number - makes a welcome return to Vancouver on April 25th. It's Blues Night Out with The Rogue at The Chan Centre at UBC, with Taj and his trio supported by the new Queen of the Blues, Shemekia Copeland. Taj is best known as a Blues musician, of course, but his Country Blues is closely related to the Old Time Appalachian songs that came over from England, Scotland and Ireland over 200 years back. He can even be seen in the movies Songcatcher and, if I remember correctly, O Brother Where Art Thou?

The Rogue rounds out April with a return to the roots of gypsy music and the ghazals, or love songs, of Rajasthan, with Indo-Canadian singer Kiran Ahluwalia and her band at St. James Hall on April 28th . Her latest CD, Aam Zameen: Common Ground, sees her team up with Mali's Tuareg nomadic blues groovers Tinariwen - just one example of how eclectic are her tastes and how closely related all really good music can be! And it's all at The Rogue in the next few weeks!

In May there will be concerts by Portland's Old Time quartet the Foghorn Stringband (May 3rd at St. James Hall,) Canadian fiddle prodigy Kierah Raymond with guitarist Adam Dobres celebrating The Rogue's 26th Anniversary on May 10th , and English guitarist / songwriter Richard Thompson at The Rio Theatre the following night (tickets for that one are at Ticketmaster; it's not a Rogue show.) Richard has a great new double CD, Electric, which is actually a lot less electric than you might expect from the title, although he does treat us to some of his scorching hot guitar solos on a few of the tunes. What an incredible talent he is!

Just to bring things back full circle, this month marks the 35th anniversary of the passing of Thompson's former bandmate, the lovely Sandy Denny, who recorded one of my favourite versions of that Raggle Taggle Gypsies song, Gypsy Davey, on Fotheringay's 2nd album. Last year, English singer Thea Gilmore released a stunning CD of songs written and unfinished by Sandy Denny. it's called Don't Stop Singing, and is highly recommended!