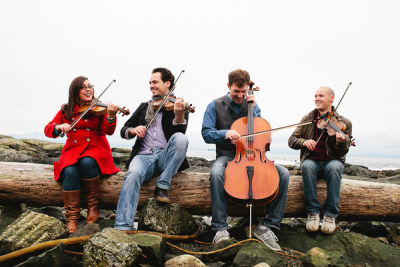 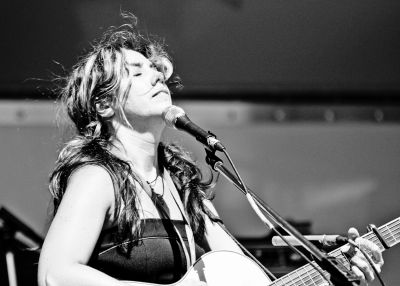 The Fretless is a new approach to folk music that is quickly gaining high acclaim around the world. This unique band is taking string music to fascinating places as it transforms fiddle tunes and folk melodies into intricate, beautiful, high-energy arrangements.

In November 2011, Karrnnel Sawitsky (Fiddle), Ivonne Hernandez (Fiddle), Eric Wright (Cello) and Trent Freeman (Fiddle) got together for the first time on Vancouver Island to start rehearsing this project. After 10 days straight of writing, arranging, practicing and an absurd amount of tea, The Fretless emerged as a band.

With the release of their debut album Waterbound in early 2012, which features their fresh styles, compositions, as well as collaborations with singers Ruth Moody and Norah Rendell, the quartet grabbed the attention of critics and fans across many genres. This recording fueled a busy summer of festivals across Canada, a month long tour of Germany in the fall, and world wide sales and radio play. The year was capped with 3 awards, bringing the album, and the band further into the public eye; Instrumental Album of the Year at the Western Canadian Music Awards, and at the Canadian Folk Music Awards, the Fretless walked away with both Ensemble of the year, and Instrumental Group of the Year.

The Fretless is an innovation in music that must be heard. They harbor all the energy of fiddle tunes, while shattering all expectations in writing, creativity and performance.

Cara Luft will be joining the Fretless for this show. She will be accompanied by Gilles Fournier.

Juno award-winning singer-songwriter Cara Luft is that rare artist steeped in folk and traditional roots music almost from birth yet willing to alter that fabric, stretch the boundaries, not afraid to bend genres and styles. She has recently released a a stunning new collection of songs, Darlingford, the much anticipated third album by this Calgary-born, Winnipeg-based performer. It is her most intimately personal and fully realized recording to date, drawn from recent life experiences and informed throughout with her indomitably optimistic spirit and impeccable musical instincts. Recorded primarily in the tiny rural southwestern Manitoba community of Darlingford (blink and you’ll miss it), the album shines a bright light on Cara’s skill at turning personal heartbreak into universal themes that resonate with listeners and is a musically deep, undeniably rich example of life informing art. Luft has earned a solid reputation as one of Canada’s finest live performers and acoustic guitar players whose engaging, down-home style is wrapped in a delicious sense of humour. Cara’s the real deal, there’s nothing pretentious about her.  And that sense of honesty, integrity, personality and spontaneity permeates and resonates throughout both her music and her live shows.

"[Luft's] amiable vocals and simplistic, lush instrumentation follow that of the long honoured folk tradition with a modern twist.  Lyrically [she] is like fresh linen on a Brooklyn clothesline. Her writing [is] redemptive, earthy and rooted in realism…. Darlingford conjures visions of blooming flowers in an apocalyptic wasteland, gold flaked tumbleweeds on the Trans-Canadian highway at dawn and a glimpse into the fractured and glowing soul of a talented writer and performer." - No Depression