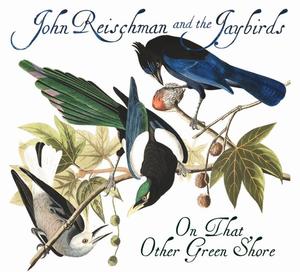 The brand new CD by John Reischman & the Jaybirds is On That Other Green Shore. It's hot off the presses, and it will be available at the show. For this recording, they've chosen material to showcase the signature Jaybirds blend of old-time and bluegrass music, this time with an added emphasis on the bluesier side of bluegrass and a surprise foray into the Beatles songbook, for good measure.

Their seventh album, On That Other Green Shore marks a turning point for the Jaybirds not just stylistically, but also because its release coincides with the departure of their long-time guitarist, Jim Nunally, and the entrance of new Jaybird compadre, Patrick Sauber. Many of you may know him as the banjo player with Laurie Lewis and The Right Hands, or as the guitar player in John Jorgenson’s bluegrass band, or maybe as the son (and musical partner) of legendary old-time fiddler Tom Sauber. Or maybe you know him from his work with Christopher Guest in the film A Mighty Wind, where he was a key member of the New Main Street Singers. Or you might have seen him playing with John Fogerty, or on the Tonight Show, or with Tim O’Brien.

The Jaybirds feature some of the finest acoustic musicians on the road west, led by veteran performer John Reischman.  A world-renowned mandolinist and composer, John began his career in the San Francisco Bay area in the early '80s with the Good Ol' Persons bluegrass band and the legendary instrumental new acoustic quartet the Tony Rice Unit.

John moved to Vancouver in the early '90s and formed the Jaybirds, a two-time Juno-nominated band delivering their own trademark blend of original songs and instrumentals, reimagined tunes from the old-time vaults, and bluegrass power. They are simultaneously modern, vintage and unique.

John has also released three critically-acclaimed solo instrumental albums, and recorded on dozens of other projects, including the Grammy-winning True Life Blues: The Songs of Bill Monroe.  Bluegrass Unlimited magazine called John "one of the world's undisputed masters" of the mandolin, and he's known for producing wonderful tone from his famous 1924 Gibson 'Lloyd Loar' F-5 mandolin.

"The folks he's playing with are neck-and-neck with him all the way," Victory Review magazine said of the Jaybirds.  "Though Reischman is the leader and front man, he gives each of them plenty of room to shine, and together they produce music that is seamlessly excellent and rewarding," Sing Out! magazine said of the West Coast ensemble.

Chilliwack, BC based Trisha Gagnon is portrayed by Sing Out! as "one of the most versatile" and "irresistible" lead vocalists in bluegrass, her strong and distinctive style ranging from "mournful and plaintive" to "hopeful and yearning." Trisha anchors what Dirty Linen magazine calls "gorgeous three-part harmonies." She's also known for songwriting, dating back to her early days with the award-winning B.C. bluegrass band Tumbleweed.  Her solo album includes guests Vince Gill and Peter Rowan.

Nick Hornbuckle has developed his own voice on the five-string banjo - a two-finger roll unlike other contemporary banjo players.  "Nick Hornbuckle's banjo can be downright spine-tingling," said the L.A Daily News.  His solo album 12x2 (+/-1), was nominated for a Canadian Folk Music Award in 2015, and Nick is a composer who also digs for rare old-time gems.

Spokane, WA-based Greg Spatz is hailed as a "world-class bluegrass fiddler" by Fiddler magazine.  Audiophile Audition says Fiddlin' Greg's "virtuosic playing is flawlessly delivered time after time."  His Paul Bunyanesque chops have made him a popular fixture down through the years on the West Coast, where he's played with iconic mandolinist Frank Wakefield and resophonic guitar master Rob Ickes.  Greg also tours and records with Mighty Squirrel, has a solo album called Fiddler's Dream, and is an award-winning novelist.