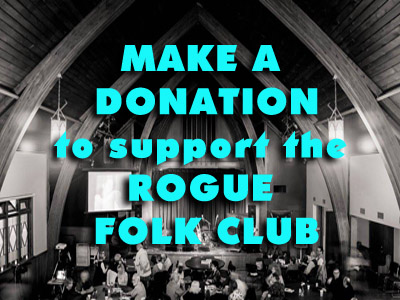 A new Roy Forbes recording is a rare occurrence. Roy doesn’t pop ‘em out every year or so. He takes his time, working slowly to get it right. Edge of Blue may just be the Vancouver singer-songwriter’s best yet- a summation by an artist who has been doing this for a long time. On this album both Roy’s roots and routes are showing; the influences he’s absorbed and where he’s been. Edge of Blue is 10 songs full of wisdom, confessions, vulnerability, sensuality, self- reflection and celebration. More of a soul album than country or folk; it has nothing to do with what is ‘hip’ and ‘happening’ in the mainstream music business. This is art song - memorable words, compelling compositions, spare production and a voice every bit as original as when the “Kid Full of Dreams” first came to town almost fifty years ago- pure Roy Forbes.

Roy Forbes is one of Canada’s best known and best loved songwriters and performing artists. He’s been at it for almost fifty years and has picked up some tokens of appreciation from his peers. There is a street named after him in his hometown of Dawson Creek in Northern B.C. and a star on Vancouver’s Granville Street where the names of the B.C. Entertainment Hall of Fame members are enshrined.

Mainly, and more importantly, Roy is firmly etched in the minds of thousands, tens of thousands in fact, of music lovers across the country. Some remember a skinny kid who went under the name of Bim, others the more mature man who reclaimed his ‘real’ name. Some got to know him at festivals from Faro in the Yukon to Ottawa as Roy trod the boards from the seventies to a stellar performance at the fortieth anniversary edition of the Vancouver Folk Music Festival. For others it was at a myriad of folk clubs and concert stages.  For still others it was Roy as a member of a contemporary folk supergroup- UHF- where he joined forces with Shari Ulrich and Bill Henderson. For some it was Roy’s searing rendition of Hank Williams’ So Lonesome I Could Cry, for others his sweet treat Christmas anthem- Mince Meat Tart, or Tender Lullaby, while others heard him second hand through Shawn Colvin’s cover of Talk Around Town. Roy has made his mark for generations of listeners as a solo, band leader, ensemble member, interpreter and songwriter. This is not to mention his work as a record producer, radio host at CBC Radio & CKUA, and popular music historian of 78 RPM records. Over the last five decades Roy has had a few brushes with fame and endured, becoming an organic part of Canadian music.

The last few years have been a challenge. Afflicted with poor vision all his life, Roy was blinded by an accident in 2015. He may have lost his sight but not his vision. Roy has adapted to his new reality, returning to touring and performing and recording and all the other things he does so well. He is now among the blind seers who populate history from Homer, who gave us the Odyssey, to Blind Willie Johnson and Roland Kirk, Ray Charles and Doc Watson and others who gave us some of the world’s best music. Now Roy is serving up his latest album, something like his 11th solo effort.

"On his 11th album, the Canadian folk fixture from Dawson Creek offers up another collection of soulful numbers that range from an almost La Bamba-esque early rock ‘n’ roll sounds (Don’t Let Go), to beautiful country folk balladry (The Beating of Your Very Own Heart) and sweet blues (Feeling Mighty Lonesome). As always, his quavering tenor is powerful and full of emotion, the playing is deep in the pocket and listening to the album leaves you wondering why he isn’t a household name." - Stuart Deredeyn The Province / Vancouver Sun.