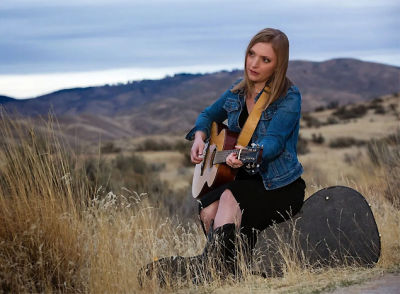 As the reigning Queen of the Minor Key, Eilen Jewell leads a tight quartet that blends influences of surf-noir, early blues, classic country, folk, and 1960s era rock ’n’ roll. For well over a decade, they’ve toured relentlessly for legions of fans from Boston to Boise and Madrid to Melbourne, playing large festivals, theaters, rock clubs, and coffeehouses. The group has shared stages with the likes of Lucinda Williams, Loretta Lynn, Mavis Staples, Wanda Jackson, George Jones, Emmylou Harris, and Blind Boys of Alabama. Eilen’s fans have marveled at her warmth and onstage humor alongside her beautiful songs and fiery performances. In addition to six of her own full-length albums, Jewell has released two albums with her country-gospel side-project, the Sacred Shakers; a tribute album to Loretta Lynn titled Butcher Holler; and a recent album of rare blues covers, Down Hearted Blues.

The Los Angeles Daily News said, “Sometimes as darkly damaged as Lucinda Williams, at others as defiant and teasing as prime Peggy Lee and always authentically Americana in the Gillian Welch tradition … She’s mighty good.”

American Songwriter describes Eilen Jewell as “one of America’s most intriguing, creative and idiosyncratic voices.” That singular voice springs forth from a woman of more than one mind, and she taps into many of them on 2019’s Gypsy on Signature Sounds.

By turns personal and political, pissed off and blissed out, Jewell’s first album of original material since 2015 expands brief moments of joy into lifetimes, and distills epic sentiments and persistent doubts into succinct songs. Yet rather than pulling artist and listener this way and that, the tensions within and between these 12 tracks propel her eighth studio album forward as a remarkably cohesive full-length

“I’ve been writing bits of that one for close to eight years now,” says Jewell. “I’ve felt that polarity in my life a lot, ever since I can remember, and I wanted to capture that discomfort and angst. Putting it into words and music felt cathartic. Now, whenever I feel that tug-of-war, I can sing my song about it.

“Witness” sits at another end of the spectrum, a celebratory sunset burnished with honesty and understated brass, written quickly in a Central Idaho cabin. “I was still a relatively new mother, and experiencing this frequent opening of my heart, realizing that it had been clenched like a fist for so long. Little ones have this way of disarming us, and so do little moments that startle you, like a beautiful sunset or a bird song… but that openness is always there. You don’t have to seek it out, you just have to choose to open yourself up to it.

Agitated by the state of the world, Eilen gave herself permission to tiptoe into protest music on Gypsy, too. “79 Cents (The Meow Song)”skewers sexism and discrimination with pointed humor, while “Beat the Drum” lifts up a rallying cry to fellow travelers struggling to maintain hope in the face of adversity. Startled by backlash from both sides when she casually spoke some common sense about the Chief Executive in a recent interview, she decided to speak out rather than shut up. “I don’t see politics as separate from the rest of life. They’re intertwined. This is personal, especially in the past few years.

Long hailed for her ability to interpolate different genres into her own sound, Jewell manages to make the distinct songs of Gypsy play well together, without compromising their individuality. By the same token, she’s rarely seemed more willing to let different facets of her personality and talent shine through.

“I always try to be honest when I make an album. ‘Is this really what I want to say? Is that how I want to say it?’” With time and experience, trust in her own ideas and abilities continues to escalate. “Writing still doesn’t feel like an easy process, but after 13 years, it’s a bit more second nature.” Gradually, she’s accepting that all her feelings are valid, even if they sometimes seem at odds.

“I often resent that feeling of being pulled in different directions, but without that pull, life is like a guitar string that’s not taut,” she concludes. “A loose string makes a terrible sound.”


Jeff Plankenhorn, singer-songwriter and all things strings multi-instrumentalist—guitar, lap steel, mandolin, piano, upright bass—began his career as a boy soprano in Ohio. After studying music theory and composition at University of Michigan, Texas beckoned when Ray Wylie Hubbard enticed Jeff to join his band. Slide guitar virtuoso, Jeff spent his early career backing the likes of Hubbard and Joe Ely. His patented lap slide guitar, “the Plank,” with a distinctive sound derived from the instrument's square neck and electric guitar body, netted him an Austin Music Award in 2017.

Now a potent solo artist, his larger-than-life presence on stage binds together a host of talents into a powerful whole. His soulful roots rock gained him a seat among the best contemporary Americana songwriters, while the vocal clarity and power developed in his early years is unmistakable in his poignant baritone now. Jeff’s deep sense of community is evident in the Purgatory Players Gospel brunch, contributing 153,275 meals to the Texas Food Bank in 2019 and his fundraising efforts for the Health Alliance for Austin Musicians. He has collaborated with Ray Wylie Hubbard, Joe Ely, Patty Griffin, Ruthie Foster, Bob Schneider, the Flatlanders, “Scrappy” Jud Newcomb, and more.

Our COVID-19 Policy: federal health officials are urging Canadians to wear face masks indoors and continue following other public health precautions. We agree with this recommendation. We offer streamed concerts as a safe alternative to attending shows in-person.