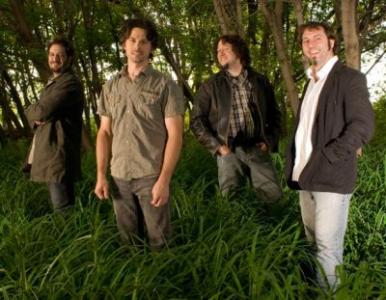 For the second time in a little over a year we had to cancel a concert due to volcanic activity. Last year it was Dougie MacLean anchored down in Anchorage. This time, the eruption of Eyjafjallajokull, the Icelandic volcano, caused the cancellation of hundreds of Trans- Atlantic flights. Quebec's Le Vent du Nord were at the end of a European tour, and were forced to wait several days in Brussels for a flight home. Consequently, two concerts had to be rescheduled - ours, and one in Vernon, BC. Luckily, we were able to find a new date for the show, and we are delighted that they will be with us after all.

Tickets for the original show (April 21) will be valid for this show, and new tickets are now available at all our outlets.

Since its inception in August 2002, Le Vent du Nord have enjoyed rocketing success. They have received several prestigious awards, including a Juno. The band is now one of the best-loved Quebec folk outfits throughout the world. The group's current line-up consists of singers / multi-instrumentalists Nicolas Boulerice, Simon Beaudry, Olivier Demers, and Réjean Brunet. Some of their songs come from traditional folk repertoire, while others are original compositions. On stage, these four friends achieve peaks of happiness they eagerly share with any and all audiences. Le Vent du Nord know how to deliver music that will move any crowd - to their feet and in their hearts! This is undoubtedly music of the here and now.

As the powerful wind whips across the Canadian landscape it brushes away layers of debris to reveal gems once buried and thought to be lost in the past, while it simultaneously fans the flames of innovation. Québec's Le Vent du Nord (The Wind of the North) has rewritten a transatlantic francophone story of discovery and loss seeking to uncover their heritage while sailing along new paths of artistic discovery.

The title of their latest album La Part du Feu (November 3, 2009; Borealis Records) hints at this dual objective, coming from an old French proverb which states that one must give to the fire its share, or forfeit something in order to build our collective future. Without sacrificing the integrity of their heritage, the group uses the kindling of the past to produce a hotbed of creativity. By welding a wealth of musical genres into a seamless artistic statement, the band successfully lights their way forward. The members of this ensemble have a keen sense of their local history, seeking to recover, restore, and reinvigorate Canada's deep musical roots, so that they may blossom once again in a modern setting.

"Through traditional songs we discover pieces of our history," says founding member, pianist, accordionist, and hurdy-gurdy player Boulerice. "The songs provide direct contact with a moment from long ago, showing us what life was like at that time." Accordionist Brunet adds, "On this record we wanted to put a spotlight on the texts of the songs to bring out their stories. We wanted to show that this music is not just for parties, but can also tell us about who we are as Québécois."