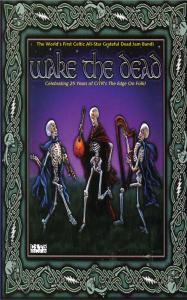 “This marks the beginning of an era of music that I think is the most important, wonderfullest thing to happen to Grateful Dead music since Jerry died. I haven't heard anything that portrays the spirit  not even coming from the Grateful Dead members  that came close to realizing the kindness of Jerry Garcia and the spirit of the Grateful Dead. ”

“Five stars! This record captures more fully than any single Dead album or tribute project, the melodic beauty, lyrical depth and timeless quality of the Garcia/Hunter songbook ... shimmering renditions of Dead music fused with Celtic beauty. The music is masterfully performed with Dead-hommage vocal style, and great traditional Celtic instrumentation. The Dead songs fit this genre very well. I think any fan of the Dead will appreciate these renditions of their music. I know Jerry would've dug them. ”

Celebrate the 25th anniversary of Steve Edge's weekly radio show, The Saturday Edge, which has graced the airwaves on CiTR fm 101.9 since June 1, 1985. It's also the 40th anniversary of the Grateful Dead's first ever concert outside North America - at Staffordshire's Hollywood Music Festival. And Steve was there!

So, to mark the occasion, The Rogue presents the Canadian debut of the World's First Celtic All-Star Grateful Dead Jam Band: Wake The Dead

As an expression of cultural joy, you can't top an Irish wake. And what is a wake but a celebrationa toast of appreciationan expression of loveand a damn good party?. So when seven top Bay Area musicians realized they shared as deep a love for the songs of the Grateful Dead as they did for traditional Celtic tunes, some brand-new music sprang up and started partying.

Wake The Dead is a romp that flows seamlessly from rock grooves to hot Irish reels, and from haunting airs to achingly beautiful melodies familiar to Deadheads everywhere. "Sugaree" in waltz time, bracketed by an ancient harp tune and infused with a poignant Celtic longing. "Bertha" thundering out of "China Cat" on a mandolin tidal wave. The eerie lilt of the uilleann pipes, giving a glow to "Bird Song" as if it was always meant to be there. Groove jams to keep the tie-dye swirling. Vocal harmonies that float like clouds. The music takes off, and the band follows, grinning all the way. These aren't worlds collidingthey're worlds meshing, coalescingcreating a whole new world of possibility, and true to the spirits of the Grateful Dead and the eternally hopeful Celts.

Wake The Dead bands together seven of the best-known and most respected players in the west. Harper Maureen Brennan has performed widely for over 20 years. Her recorded works include three solo CDs and the acclaimed "Harpistry" collection. Bassist Cindy Browne, enlisted from the eclectic world ensemble Next Village, is equally at home in folk and jazz, touring from Jordan to Japan. Singer, fiddler, and fretman Danny Carnahan is a two-time NAIRD "Indie" award winner whose original Irish-tinged songs (including a collaboration with Robert Hunter) are popular worldwide. Kevin Carr is a musical triple-threat, renowned in the U.S. and Canada as a dance fiddler, a pennywhistler, and Irish piper par excellence. Sylvia Herold's delicious vocal phrasing can be heard on her two solo CDs and in her concerts with several popular swing bands. Paul Kotapish is known far and wide for his concerts and recordings with Kevin Burke's Open House, and for his blazing guitar and mandolin with The Hillbillies From Mars. And percussionist Brian Rice, with his expertise in Latin rhythm, rounds out the band's groove engine.

Wake The Dead has wowed concert and festival crowds from San Francisco's Fillmore Auditorium to the Oregon Country Fair. National radio play and concert tapers are spreading the music wider every day.

The eponymous debut album (2000) was a huge success, and the second, Buckdancer's Choice (2002), is now available on Redwing Records. The third CD, Blue Light Cheap Hotel (2007), saw them branch outside the GD canon for the first time, with a Dylan song and a Carnahan original lining up alongside more GD classics and stirring Celtic melodies.

So kick back, join the party, and wake the dead!

And don't forget to tune in to The Saturday Edge / The Edge On Folk every Saturday from 8am to noon on CiTR fm 101.9 and www.citr.ca