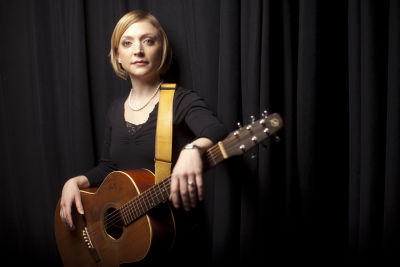 Sometimes as darkly damaged as Lucinda Williams, at others as defiant and teasing as prime Peggy Lee and always authentically Americana in the Gillian Welch tradition... She's mighty good. — LA Daily News

Jewell's music has the languorous quietude of (Gillian) Welch or Norah Jones, but there is something more direct, almost in your face, about her stark, neo traditional melodies, subdued vocals, and confident, slow-swaying groove. It's as if she's daring us to say we miss the bells and whistles of pop... Jewell's songs are achingly good, twanged-out elegies to a world of barbed wire, rusty trucks, and a frontier that no longer exists. Listen for the swagger of 'Mess Around.' Blue state or red, cowboy or city girl, this is likely the best song about cutting loose that you've heard all year. — Boston Globe

In an industry in which it's too easy to do it wrong, Eilen Jewell has done it very, very right, resulting in this superb and seamless romp through swing jazz, smoky country ballads, and nostalgic old-time music... It's a winner. — Sing Out!

On (my first 3) albums, she reflects, people told me they heard folk, country, western swing, rockabilly, and even jazz... but a part of my roots has been left out up until now.

In April 2009, Signature Sounds released Eilen Jewell's third album, Sea of Tears, a recording that fills in a vital, hitherto missing element of her musical persona. Before I discovered Woody Guthrie and folk music, she explains, I was listening to Elvis Presley, Buddy Holly, and, later on, the Animals and the Kinks. I love that stuff, and I love to play it.

With Sea of Tears, Jewell and her longtime band of Jason Beek (drums, harmony vocals), Jerry Miller (electric, acoustic, and steel guitars), and Johnny Sciascia (upright bass) wed her elegantly unflinching songwriting with a rustic, pre-Beatles swagger that encapsulates vintage R&B, Midwestern garage rock, Chicago blues, and early rock and rockabilly, while maintaining the haunting, folk-inspired purity that first made her an artist to watch.

I had a dream about the title track, she recalls. and when I woke up, I was able to remember my dream and the song wrote itself. I wish I could have more dreams like that... Sea of Tears wraps a bitter, confrontational missive in a sinuous, sultry groove punctuated by Miller's slashing guitar. In the role of a woman ignored, Jewell doesn't howl - she looks the object of her affection straight in the eye and plainly, firmly states that without him, It's gonna be a sea of tears for me / It's gonna be a life of misery. The effect is disarmingly powerful - an unadorned but undiminished statement of single-minded devotion.

In contrast to the title track's seething rhythmic undercurrent, "Nowhere in No Time" (a song Jewell has been carrying with her for years, but is just now being heard) rides a gently swinging country beat, rendered with the minimalist clarity of a Sun Records country 45. Elsewhere, such as on the swaggering, blues-informed "My Final Hour," Jewell introduces a new color - the Hammond B-3 - which she had never played before. The piano was my first instrument and my first love, she says, but so far normal piano hasn't come up on any of my records! On Sea of Tears, the organ bridges the gap between the Vox-fueled garage rock of the early British invasion and grinding, organ-driven American R&B and soul.

Alongside Jewell's own songs, there are three outside numbers that point to much of the inspiration behind Sea of Tears. "I'm Gonna Dress in Black" is a churning lament gleaned from Van Morrison's Them, who recorded it originally in 1965. Loretta Lynn's "Darkest Day" is a classic honky-tonk stomp by one of Jewell's biggest influences, whom Jewell was able to open for in 2007. Most intriguingly, however, is a version of the early British rock'n'roll standard "Shakin' All Over." Rarely tackled by female singers, Jewell's clattering, simmering version is equally sensual and ominous.

I was never in a real rock band, Jewell shyly reflects. But I was in a pretend one when I was seven. We had cardboard instruments. As witnessed on Sea of Tears, Jewell approaches rock'n'roll like any other American hybrid - balancing the defining elements of the style with her steadfast integrity and never altering her approach to cater to the medium.

Since the '60s folk revival, there's been this fear of rock, she concludes. If people define you as a folk musician, it's somehow scandalous to play with drums and electric guitars. It's thought of as selling out or being commercial... but, to me, it's all folk music.