with Bon Débarras (from Quebec) 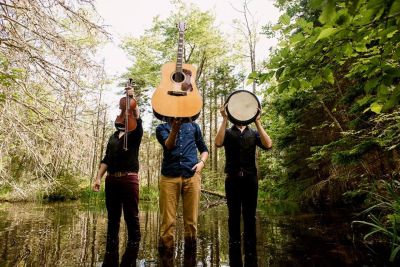 Members of Ten Strings And A Goat Skin, a bilingual band hailing from Prince Edward Island, Canada, multiple nominees for the 2013 Canadian Folk Music Awards, East Coast Music Awards and Music PEI Awards, are having the time of their lives as a trad/folk/fusion trio. Weaving the music of the Irish, Acadian, Francophone and Maritime cultures and their original creations with modern and world rhythms, Ten Strings And A Goat Skin have created a fiery, contagious and unique sound that has them in demand and touring extensively throughout Canada, the United States and Europe.

The group’s creativity and unique style has not gone unnoticed. Jesse, Rowen and Caleb highly respect the traditions of the music they play but are riding the wave that is redefining the roots of that music. Their original material maintains solid traditional elements but explores rich world flavours and textures. The results have been described as intoxicating and refreshing. By both French and English audiences, the trio is humbled by the huge reaction they have received towards their music. They just as easily connect with the indie music crowd as they do with the traditionalist and notably, their fan base carries no age barrier so including children to seniors and those in between.

Bon Débarras’ folk music is deeply rooted in the memory of French-speaking America. On their guitars, banjo, uprightbass, accordion, washboard and harmonicas, and integrating foot percussion, jig and body percussion, the trio creates musical atmospheres that transcend boundaries and ages.